How can a type of fungus that grows abundantly on dead logs and trees be medicinal for health? The Chinese have understood the value of mushrooms for centuries. These shriveled, spongy-looking things are loaded with hundreds of therapeutic constituents that reduce inflammation, strengthen the immune system, and combat pathogenic organisms. Here are 3 reasons to use turkey tail mushrooms for cancer and other chronic illnesses. 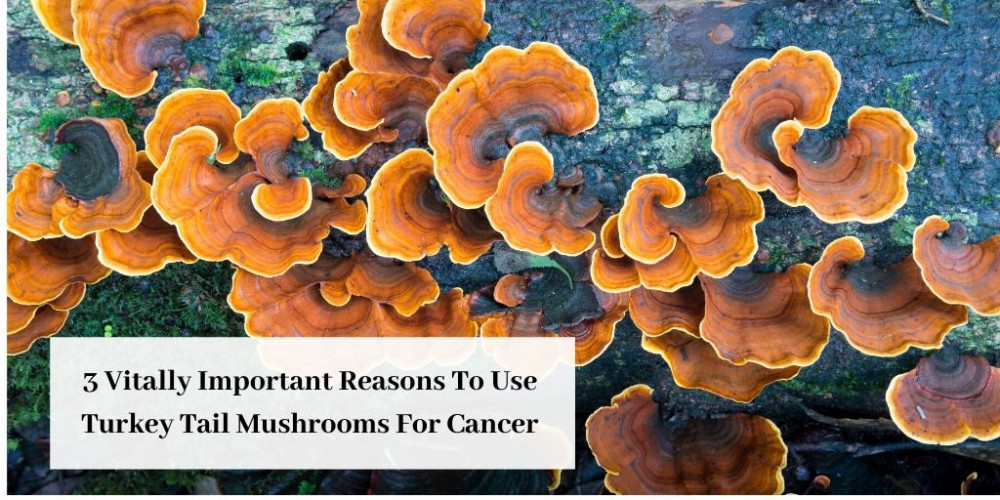 Turkey Tail mushrooms, species Coriolus versicolor, is one of the many mushrooms that have been studied for their therapeutic properties. Versicolor means multi-colored, and it’s this characteristic that make turkey tail mushrooms easy to identify, coupled with the fact that they look like, you guessed it, turkey tails.

These peculiar looking fungi are bursting with nutrition, antioxidants, and cancer-fighting compounds. They most definitely deserve the renown distinction of being one of the healthiest foods on the planet.

1. Inhibits Of The Aromatase Enzyme

Why is the aromatase enzyme significant when it comes to cancer? Because of it’s role in the conversion of androgens to estrogen. Estrogen dominance, another term for too much estrogen, is a known risk factor for cancer due to the effect estrogen has on cell proliferation and tumor growth.

Estrogen is a powerful female hormone that controls growth and development. It can also promote cell-mutation and division, along with the rate at which cells mutate. Mutations within DNA alter how cells function, which can cause them to become malignant. It’s no coincidence that female-related cancers are on the rise, especially among young women, with the plethora of xenoestrogens that are pervasive in the environment.

Xenoestrogens mimic the effects of estrogen in the body by attaching to the same hormone receptors that endogenous estrogens attach to. This can stimulate tumor growth, throw the endocrine system out of whack, and is an underlying factor in obesity, itself a risk factor for cancer.

An increase in their activity is no small matter since the immune system is the body’s primary defense against cancer, with the optimal functioning of immune molecules fundamental to the eradication of malignant cells. When the immune system is functioning as it should, processes that contribute to cancer should be derailed before cancer can take hold.

It has long been purported that viruses and bacteria play a key role in the development of cancer. Turkey tail mushrooms have strong antiviral properties that are able to eradicate tumor viruses, such as the HPV virus, which is associated with cervical cancer, hepatitis C and liver cancer, H. pylori and gastric cancer, the herpes virus and Kaposi sarcoma, and Epstein-Barr and oncogenic JC virus implicated in cancers of the GI tract.

Mushrooms are nutritional powerhouses that are rich in beta-glucans, naturally occurring, biologically active polysaccharides that improve immune function by both binding and activating macrophages, innate immune cells, to enhance an anti-tumor response. Medicinal agents in mushrooms regenerate tissue growth, produce enzymes, and accelerate healing. They also decompose pathogenic organisms, prevent damage to DNA, block cell replication, and detoxify tissues and cells, all functions that halt the development of cancer in the first place.

Turkey tail has an exceptional antioxidant profile, raising levels of two of the body’s most important enzymes, glutathione and superoxide dismutase (SOD). Antioxidants clean up the damage caused by free radicals and oxidative stress, a type of stress that damages cells and leads to chronic inflammation, both key factors in cancer development.

As referred to above, turkey tail contains copious amounts of health-promoting polysaccharides, called beta-glucans, which correlate with reductions in tumor growth and metastasis. Angiogenesis, the development of new blood vessels from pre-existing ones, is one mechanism in which cancer spreads and tumors grow because additional blood vessels supply a steady influx of oxygen and nutrients, enabling cancer to thrive.  Beta-glucans are thought to inhibit the spread of cancer and prevent tumor growth by halting new blood vessel growth, making them anti-angiogenic, anti-tumor, and anti-metastatic.

In 1980, PSK, also known as Polysaccharide K and marketed as Krestin, was approved in Japan for treating numerous cancers. It’s known as Yun Zhi in traditional Chinese Medicine, and has been used as a holistic remedy for thousands of years. Cancer patients in Japan have access to both PSK and Polysaccharide Peptide (PSP), another powerful compound, which are used in conjunction with conventional treatments, such as surgery, radiation, and chemotherapy. Sadly, in the United States, PSK is still regarded as a nutritional supplement that is strictly used alternatively to treat cancer.

Mushrooms are also fantastic for pets

Mushrooms are generally thought of as culinary delights rather than powerful non-toxic agents for cancer, although they are used worldwide for their outstanding nutritional profile, their anti-viral and anti-bacterial properties, and to strengthen the body’s defenses.

Medicinal mushrooms are used in conjunction with conventional cancer treatments like chemotherapy and radiation to build and support immune function. If you or someone you love has cancer, please learn more about these amazing superfoods that can be used as an adjunct therapy in your cancer-fighting arsenal.

Did you know that mushrooms can be used medicinally? Please share your thoughts in the comments below:)

(1) Cancer Biology Graduate Program: How Mutations In Cell DNA Can Lead To Cancer

(3) Women in Balance Institute: Medicinal Mushrooms and Breast Cancer: What is the latest research?

(4) PubMed: Effects of beta-glucans on the immune system

(5) The Truth About Cancer: 5 Medicinal Mushrooms That Fight Cancer

(6) The Truth About Cancer: PSK: Popular Japanese Cancer treatment STILL Not Approved in the U.S.

(7) PubMed: The Role of Viral and Bacterial Pathogens in Gastrointestinal Cancer

(10) NCBI: Targeting Macrophages in Cancer: From Bench to Bedside